The more I learn the less I know; Tony Bennett on the fountain of knowledge that feeds an ocean of answers that are served by the droplet and limited by our mortal lifespan.  Knowledge is an amazing thing though, every time you learn something new it creates more questions in your head than the answers you have just assimilated.

The adaptation process is a critical part of cognitive development. Through the adaptive processes of assimilation and accommodation, people are able to take in new information, form new ideas or change existing ones, and adopt new behaviors that make them better prepared to deal with the world around them. 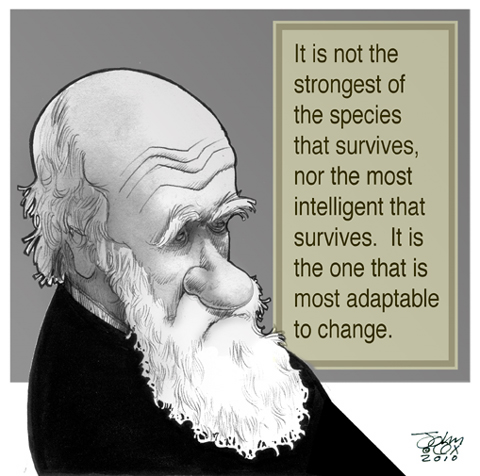 This may best describe my last 50 years, certainly not the most intellectual or the strongest but one of the most adaptable. Growing up as a very small younger brother and with my all friends, and not friends who where all huge, I learned to run faster scarred than most could mad with extreme awareness of my present environments. Agility with the ability to go around unmovable objects quickly proved to be a good life skill.

Now my old head hurts, my personnel evolution of change has been overwhelming.  We all need to change but we are drowning in information, so much to learn dynamically changing daily in ever-expanding amounts that include the vastness of many new realms of science and technology including complete other industries all now viewed and opinionated instantly by the whole world.

Lately, I have been writing about Be the Change  and  Chose to Challenge
We then followed up with the Women waiting wanting wave of change outlined in Our March Issue Our Amazing Women Choose to Challenge  sub-theme is Be the Change fitting well, because from challenge comes change the IWD 2021 campaign theme.

Scott talks about industry change and the Adaptation to the end of an Era,
The End of the BAS Era   By Scott Cochrane, President and CEO, Cochrane Supply & Engineering; Contributing Editor, AutomatedBuildings.com

THE FIRST ERA OF BUILDING AUTOMATION | THE PNEUMATIC ERA (1900s to 1980) - This era started in the early 1900s with stand-alone pneumatic controls / air pressure-driven devices. These devices were continually improved into the 1960s when the receiver controller, pneumatic sensors and other innovations allowed for AHU and centralized control in large buildings for the first time. This led to great growth for the industry in the 1970s because they could finally offer better comfort control more efficiently. All good things come to an end and so did the PNEUMATIC ERA, when the microchip became available to the industry in the early 1980s. The microchips brought computers, and with computers came a new era in BAS...

When I, Ken Sinclair, started in this industry in the 1960s I found my way to the service department of Johnson Control, I was introduced to pneumatic systems still operating dating back in the early 1900 and had to work with clients to find survival solutions, get my head around the evolution of central panel pneumatic transmission in the large buildings, understand the first fluidic logic performing analog or digital operations similar to those performed with electronics. (the first Air Computers), the transition to hard-wired logic system, then transition to electronic controls, (a very bumpy process), central computers connected to pneumatics and then I shifted to being a consultant (because no one knew what else to call me) was very early to the Direct Digital Control "DDC" industry 1975 using DEC PDP11 mini computer and the first DDC stand-alone computerized panels. We made most of our own sensors because most had not been invented yet or were too expensive. Learning and Adaptations had become a way of life, I knew nothing else it just became my way of coping and moving on.

Be sure to read Scott's complete article that ends here

THE OPERATIONAL TECHNOLOGY (OT) ERA (2020 to hopefully I’ll be retired????) - Here we go, into the great IT black hole—a whole new vocabulary and a new way of architecting our BAS solutions. No longer will we be worried about what kind of protocol the systems has, but instead whether the IP device has an API or a web server. The OT era will allow us to cost-effectively connect different building control applications together on a dedicated network on premise and allow for the systems to work together to accomplish new applications in occupant and owner experiences.

YES, the BAS industry is becoming another IT industry, just like the telephone industry did. Instead of dedicating a business's IT department to dealing with networks that support the building, these new networks will be designed by mechanical engineers, installed by mechanical contractors, and maintained by the building’s facility staff, all of whom will combine their mechanical knowledge with new IT knowledge to craft a modern solution. Welcome to our new reality—completely IP based digitized systems controlling buildings with 100X the data. That data, constantly being analyzed by analytics driven by artificial intelligence, are creating new energy efficiency standards, new building control capabilities, and an entire industry of new smart building features now enabled for the owners and occupants within.

It never stops as our connections and their methodology keep growing and morphing.  In this next discussion, I am whispering with Sweden, because the information is now instant, global, anywhere and anytime so you can drown in the information or get out of your head and adapt.

A discussion between our contributing editor Nicolas Waern and Ken Sinclair

Hi Nicolas, how are things going on? I see that you are really pushing the boundaries of automated buildings, and talking about 3D printing, energy, railways, national digital twins, and other things. Are you leaving the fold?

It’s more that I have felt a need to “go beyond buildings for real, to come back to the real-estate industry armed with the knowledge that we need to have”, like I said at the beginning of the year. I think that’s the only way to learn, and to understand what others are doing in the industrial space, or even healthcare. Hospitals for instance are a part of healthcare too, so that space is very interesting from a Building Automation, indoor Air Quality perspective.

This conversation lead to, What the difference is between the past, present, and future ways of working? The conversations weave in and out of social media post capturing several folk's global opinions. This is an adaption we all need to make including the online medium as part of our discussions.

Okay, so maybe instead of Location, Location Location, you are saying that it’s more about Context, Context Context? Fascinating. But is there any method to the madness?

Any method to the madness? Well, yes and no. I don’t save any energy for the swim back to shore, so I’m constantly out there in the deep waters. But most recently I’ve taken the lead for interoperable Digital Twins in Manufacturing, as well as the European lead for the Infrastructure Working group at the Digital Twin Consortium. So, if there are people in Europe (or elsewhere) and want to know more about what the concept of Digital Twins can do for infrastructure, just reach out to me and join a session as a guest!

Digital Twins is definitely the new hype. I see it everywhere these days and I heard that some people even say that all buildings will have a digital twin in the future. Do you agree?

I really don’t agree with that statement at all. Buildings will definitely not have a digital twin in the future. They will have hundreds of Digital Twins in the future! The OEMs will have digital twins of their products and there will be digital twins of complete assets, part of assets, and individual components of the HVAC realm as a whole. The buildings themselves need to be part of the Smart Grid Digtial Twin and the Smart City Digital Twin which both consists of hundreds if not thousands of Digital Twins. And the owners will probably have a Digital Twin with data built from other interoperable Digital Twins. Knowing this, and also the challenges that exists already with data-integration, puts even more emphasis on the importance of interoperable Digital Twins, and semantic interoperability as a whole.

World made for Humans? Or Machines? Simplifying the Complexity of IoT

As our mediums of communication evolve the reach of our voice moves from local, to national, to global, from workspace to everywhere. We need to be the change, disconnecting from our learned perceptions hone our superpowers "Adaptation"

Dylan was right The times they are changing

Come, gather round people wherever you roam And admit that the waters around you have grown And accept it that soon you'll be drenched to the bone If your time to you is worth saving Then you'd better start swimming or you'll sink like a stone For the times, they are a changing