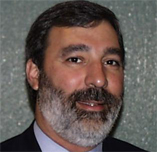 The actual determinant of space ventilation rate (Vbz in the 62.1 procedure) is population.  CO2 control proponents mostly ignore that fact and prefer to focus your attention on odor and human bioeffluents.

Sinclair:  There appear to be many sensing, application and methodology issues to overcome.  Why do CO2 control supporters believe this method works?

Damiano:  Allow me to explain and challenge some of the justifications of CO2 lone-input methods.

1.    CO2 directly addresses only the “people component” of 62.1 rate tables and has no direct and no indirect relationship to the “area component” of the rate tables.  The only relationship that exists is with “rate/person” through the assumptions highlighted in the Steady-State formula.  To make this leap for control purposes requires the acceptance of large uncertainties in outdoor air control set point maintenance, together with deliberate over ventilation (through theoretical calculations or “worst-case” assumptions) as populations change.

With the addition of the “area” component in 2002, the minimum ventilation requirement varies nonlinearly with changes in population and is unique to the size and type of occupancy of the space involved.  Providing “less than that required” by the Ventilation Rate Procedure is almost a certainty under some operating conditions.  This forces the use of a “worst-case” assumption or a nonlinear algorithm using multiple set points, a different one for every space monitored then individually written into custom controller software.

Consideration must also be made for ventilation in excess of that required for the population, to compensate for all sources of potential measurement error (indoor sensor, fixed outdoor CO2 concentrations, and occupant activity level), in an attempt to prevent the intake rate from falling below the prescribed minimums stated in the Standard.  Thereafter, intake rate performance will still be limited to the cumulative measurement and hardware errors of the CO2 sensors, together with the uncertainty related to how they may be applied (sampling error, etc.).  There is no requirement in the Standard limiting excessive ventilation, so efficiency is not addressed..

2.    The actual determinant of space ventilation rate (Vbz in the 62.1 procedure) is population.  CO2 control proponents mostly ignore that fact and prefer to focus your attention on odor and human bioeffluents.  However, CO2 can be used to estimate space population in steady-state or transient conditions provided that dynamic outdoor air intake rates and zone supply rates are also known (Mumma 2005, et.al.).  Population determination with CO2 should not be excluded due to the lack of steady-state conditions, but rather due to the lack of input on the additional variables needed to address all of the relationships required in the Steady-state relationship – namely outdoor air intake rates and/or supply air rates – depending on the method selected and the type of system involved.

Multi-zone control with ventilation reset for a variable population is possible, but not without precise airflow inputs.  There are at least three potential methods (EBTRON 2004).  All of these multiple input control methods carry the uncertainties associated with CO2 concentration measurement, but modeling has shown them to be far superior in ventilation control performance than CO2 inputs alone.

However imprecise, there are applications where CO2 is the best choice to indicate changes in population.  Control acceptability with CO2 inputs and code compliance to “not less than” a fixed value, are totally different animals.  They cannot be equated easily.

3.    The cost for CO2 sensors, wiring, installation and control software should exceed the cost of simpler and more reliable alternatives (time schedules, binary occupancy sensors, existing counting systems, etc.).  CO2–based DCV will increase the engineer’s risk and extend his liability if the system does not operate as reliably or efficiently as expected.

4.    Most central to the problem is the conclusion that controlling bioeffluents is a valid objective of the Standard (62.1) and that it may be equated to controlling intake rates for dilution ventilation.  Yes, the original chamber studies in the 1930’s did focus on odor control, but only to establish a range of levels required to dilute it.  By extension, those rates were assumed to also dilute other indoor contaminants.  Without some direct measure we can never be sure that the calculated design rate will be sufficient during operation for compliance with rate-based standards and codes.  A lack of odor does not satisfy the Ventilation Rate Procedure in ASHRAE 62.1-2010, and the measurement of CO2 alone does not satisfy the IAQ Procedure.  The objective of the standard has always been “to specify minimum ventilation rates” as stated in its published Purpose since 1989 and never to limit indoor bioeffluents, (although the basis for the rates was influenced by the relationship between odors and bioeffluents, odors and ventilation rates/person).

If we did want to relate odors to ventilation rates, then using indoor carbon dioxide concentration measurement does not appear to be the way to do it.  The conclusions of the original researchers in 1936 speak directly to the use of CO2, relating to the adequacy of ventilation for odor control:

“Among the more significant conclusions arrived at by these researchers were the following:


1.    Outdoor air requirements can be determined by gauging the odor produced.
9.    Carbon dioxide concentration is an unreliable index of adequate ventilation because its concentration is not proportional to the odor intensity produced. “


5.    Another problem is that the minimum, worst-case, flow rate is allowed to be determined with a one-time manual measurement and a predetermined fixed position on a 2-position or modulating damper.  Neither of the measurement variables in this method of rate determination are sufficiently repeatable to ensure compliance and efficiency due to damper/actuator hysteresis and actuator resolution limitations.

These conclusions were demonstrated in full-scale testing with high-quality aluminum airfoil dampers that a 30 – 50% change in flow rate was possible based solely on system linkage hysteresis and later verified in full-scale system testing with full instrumentation (EBTRON 1999, 2008).  The results apply to both CV and VAV systems that use this intake control philosophy.  It is still somehow allowed by codes and standards for constant volume systems, dramatizing the ineffectiveness of the CV exceptions to intake reset and controls.

The effect of fixed intake damper control, comparing conditions at start up to operation, was modeled and published in an ASHRAE Journal article almost 22 years ago (Solberg, AJ, Jan 1990).  The industry eventually accepted the vulnerability of flow rates to fixed intake damper use on VAV systems with addendum “u” of ASHRAE Standard 62-2001, Section 5.3 Ventilation System Controls, in Jan. 2002:


“The system shall be designed to maintain minimum outdoor airflow as required by Section 6 under any load condition. Note: VAV systems with fixed outdoor air damper positions must comply with this requirement at minimum supply airflow.


A recently ANSI-approved addendum (‘62.1-s’ in 2011) makes the point on fixed damper control even stronger by being placed directly in the body of the standard.  The addendum requires modulating dampers or a modulating injection fan in VAV systems.  By its absence as a means of compliance, it strongly discourages fixed position dampers in all but the most conservative worst-case design assumptions needed to satisfy 5.3.1.  This change will be published in the 2012 Supplement to the Standard.

Finally, Demand Controlled Ventilation is NOT synonymous with the use of CO2 for intake reset control.  CO2 is merely one of several possible inputs or methods that can be used to indicate a change in population.  The latest version of 62.1 includes a new section (§6.2.7) on Dynamic Reset which includes Demand Controlled Ventilation.  It defines DCV as follows:  “any means by which the breathing zone outdoor air flow (Vbz) can be varied to the occupied space or spaces based on the changing number of occupants and/or ventilation requirements of the occupied zone.”  Please refer to section 6.2.7 in the standard for additional details.

The indirect control of intake rates, regardless of the proxy used, are loaded with compounding uncertainties that regulate the controlled variable – OA intake rates.  The indirect agent, in this case CO2 and the bioeffluents it represents, should never be confused with the approved purpose of the standard and the primary variable – ventilation rates.  Neither should the convenience of a control method be tolerated if it also brings excessive uncertainties which can circumvent the intent of the Standard and energy inefficiencies during operation that are sure to follow.

DCV is required for high density spaces and can help to satisfy both Standard 90.1 and CA Title 24 energy codes, but in very specific situations.  There is currently no supporting data to allow its  use as the sole input to control ventilation in a multi-zone building.  CO2 usage does not relieve the engineer from the responsibility of finding ways to satisfy both energy and IAQ objectives, simultaneously.

Only with inappropriately applied assumptions (or the use of creative justifications), can one conclude that CO2-based DCV can be used to satisfy the intent of Standards 62.1, 90.1, 189.1 or CA Title 24 without grossly over ventilating the occupied space.

Sinclair:  Where can we find a complete copy of the white paper?

Damiano:  A 20-page paper on ASHRAE Standard 62.1-2010 may be found and downloaded at http://ebtron.com/Web_Pdfs/SPSync/Vertical%20Marketing/White%20Papers/ASHRAE_62.1_1_Analysis.pdf